Recently I started listening to Mike Duncan’s podcasts on the History of Rome (2007-2012).  It’s interesting that he takes seriously the story of the founding of Rome by Aeneas.  Not that he believes it actually happened that way; but he does recount the tale as if it were history.  Of course, Duncan observes that we don’t have much of anything except legends to go on for the early history.  And it does make a good yarn.

I’ve always had a fondness for Aeneas.  It dates back to when I took fourth-year Latin in high school.  That class—which turned out to be a sort of independent study, since no one else signed up for the course—consisted largely of translating parts of the Aeneid.  As it happened, my encounter with the Aeneid was also the occasion for a kind of epiphany.

So what makes Aeneas, and his story, so cool?

The Aeneid is an epic poem, the Romans’ answer to the Greeks’ Iliad and Odyssey.  Unlike the Greek epics, which are attributed to the near-legendary Homer, the Aeneid was composed within recorded history, between 29 and 19 B.C., by Publius Vergilius Maro, generally referred to in English as Vergil or Virgil.  The work was seen as celebrating Roman history and its culmination in the Empire of Augustus Caesar, and became a kind of national mythology of Rome.

Vergil developed his epic out of a scattering of legendary sources, including some mentions of Aeneas in the Iliad.  Wikipedia summarizes the work this way, incorporating some useful cross-references:

Virgil took the disconnected tales of Aeneas’s wanderings, his vague association with the foundation of Rome and a personage of no fixed characteristics other than a scrupulous pietas, and fashioned the Aeneid into a compelling founding myth or national epic that tied Rome to the legends of Troy, explained the Punic Wars, glorified traditional Roman virtues, and legitimized the Julio-Claudian dynasty as descendants of the founders, heroes, and gods of Rome and Troy. 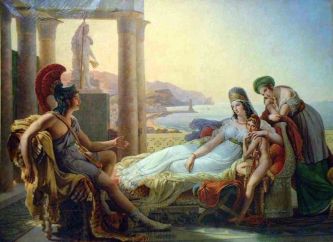 The Aeneid describes how Aeneas and his followers, escaping from the fall of Troy, set out on extended wanderings about the Mediterranean in search of the new home they are destined to find.  They stop for a while at Carthage (Rome’s traditional enemy), which is actually where the poem begins.  Aeneas tells the story so far to the attentive Queen Dido of Carthage, who is enamored of him.  It’s a classic example of starting a story “in medias res” (into the midst of things).

When he’s reminded that he has not yet arrived at his destined kingdom, Aeneas reluctantly leaves Dido, who kills herself out of frustrated love.  Eventually he arrives in Italy, where his people join forces with the native Latins, sealing the union by the marriage of Aeneas and the princess Lavinia—but first they have to defeat the local Rutuli, to whose king, Turnus, Lavinia had previously been promised.

Aeneas and his Father Fleeing Troy, by Simon Vouet (c. 1635)

The Aeneid is a story of the underdog—something that always appeals.  Rather than seizing on some glorious victor as the founder of Rome, Vergil started with the defeated refugees fleeing from the fall of Troy.  It takes some nerve to proclaim yourself the descendant of the losers.  But it bespeaks a certain humility that’s refreshing in a national epic.

On the other hand, Aeneas is not exactly a common man:  he’s the son of the goddess Venus and his human father Anchises.  Thus, Aeneas is frequently addressed in the poem as “goddess-born” (nāte deā).  Aeneas is in fact a demigod by ancestry—but he’s sympathetically human in character.  So he may be from the losing side in the Trojan War, but he’s definitely the Chosen One.

The Aeneid is not the tale of an essentially pointless war, like the Iliad, or the monster-ridden journey of the Odyssey.  Rather, it has a plot that moves definitely toward an end:  a victorious war (redeeming the defeat of Troy, perhaps) that results in a new beginning, the origin of Rome.  (Wikipedia says rather coyly:  “A strong teleology, or drive towards a climax, has been detected in the poem.”)  This gives the Aeneid a note of hope and uplift that’s harder to find in the Greek predecessors.

I like Aeneas better than most of the heroes of Homer.  He makes mistakes; he hesitates at times to step up to his destiny; he has his moments of weakness with Dido; but he’s essentially well-intentioned and honorable.

Vergil depicts Aeneas as an exemplar of pietas, a central virtue for the Romans.  It’s not quite the same thing as the cognate “piety” in English.  The root sense seems to be a kind of filial respect, but read broadly pietas becomes almost equivalent to “justice”—in the equally broad sense often given to “justice” by Plato and Aristotle, where the term encompasses the whole of morality.  Aeneas is a “good guy”—and I always have a weakness for the decent person who strives to do the right thing.

One wouldn’t be far wrong to think of Aeneas as a potential knight of the Round Table.  In fact, the original descriptions of Arthur do make a legendary connection to the family of Aeneas (in the Historia Brittonum).

Another favorable feature, to my taste, is that Aeneas is more prone to romance than most of the Homeric heroes.  (Maybe it’s his mom’s influence at work.) 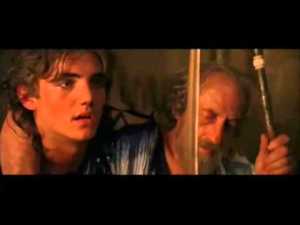 Of course, the Iliad does give us Hector and Andromache, and the Odyssey is after all the tale of Odysseus’ attempts to return to his faithful wife.  But romantic love is not the main matter of those works (I read the intrigue of Paris and Helen as more a matter of lust than love).  This is somewhat obscured in the movie Troy, where Hollywood characteristically amps up the romances of Paris and Helen, Achilles and Briseis.  (Incidentally, Aeneas appears in that movie too—for about sixteen seconds; though he does take possession of an heirloom sword to carry forward into mythical history.)

Aeneas is involved in three romances in the course of his voyaging.  To begin with, he’s portrayed as loyal to his first wife Creusa.  When she’s lost in the flight through burning Troy, he goes back at great risk to find her, but he’s too late.  He meets her shade instead, and though he tries to hold her, he can’t.  Instead, she foretells he’ll marry another.

The poem treats the idyll in Carthage as a weakness in Aeneas, because it distracts him from his destiny:  he’s tempted to settle down with Dido and give up all this strife and conflict.  But it’s the kind of weakness we moderns rather sympathize with.  When he leaves Dido, it’s for an irresistible reason—the call of destiny—and Dido’s heartbreak is portrayed as an overreaction (her dying curse provides a mythical explanation for the traditional enmity between Rome and Carthage).

Finally, Aeneas’ destined marriage to Lavinia can be interpreted as a romantic happy ending.  He names a city for her—perhaps not the typical gift to one’s wife, but certainly a grand gesture.  Not that the Aeneid treats of their relationship in any great detail.  But that leaves the field open for improvisation.  Wikipedia observes that “[t]he perceived deficiency of any account of Aeneas’s marriage to Lavinia or his founding of the Roman race led some writers . . . to compose their own supplements.”

I recently read one of those follow-up stories, Ursula K. LeGuin’s Lavinia.  It’s a good story, although it has peculiarly “meta” qualities:  LeGuin depicts Lavinia as spending a lot of time chatting with Vergil himself and pondering whether she’s real or fictional.  We still don’t get to see as much of Aeneas or their romance as I’d have liked, though LeGuin does depict the hero and their love favorably—a step in the right direction. 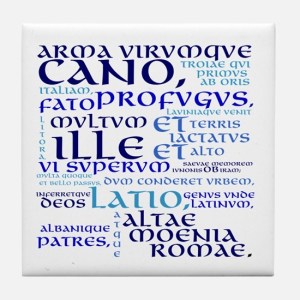 Translating something into another language can trigger reflections on language itself.

In high school, I would have said that plot was more important than character in a story—feeling a bit daring and iconoclastic in taking that position, since in those days the doctrine in English Lit classes was that Character Is Everything.  Style, or the handling of language I would have considered a distant third, at best.

But I remember going over my English rendition at one point, and not being quite satisfied.  The lines were accurate enough; but I wanted something more.  The lines didn’t sing.  I wanted them to sound better.  In fact—I was amused to realize—I wanted them to sound like The Lord of the Rings.  It’s an epic, with a heroic sword-and-sorcery setting, right?  Of course it should sound like Tolkien!

That was the point at which I became aware how much the language matters.  You can have a fine plot, you can have wonderful characters, but how that comes through to the reader depends on how you say it.  How you tell the story can be as important, in how it affects the reader, as what story you choose to tell.