Some quick, spoiler-free comments on The Incredibles 2, which I had a chance to see this weekend.

The original Pixar film The Incredibles (2004) is a great favorite of mine.  My fondness for superhero stories goes way back, and The Incredibles does an irresistible job of both exemplifying and spoofing the genre.  Moreover, it’s a character-driven story, little as one might expect that from a superhero flick.  It’s got a gallery of memorable characters—not just the family, but distinctive supporting cast members like Frozone and Edna.  And they change over the course of the tale in ways that are plausible, illuminating, and heartwarming.

The Incredibles is genre-savvy enough to be both worldly-wise and innocent.  It starts with a premise that borders on the cynical:  these costumed brawlers cause so much damage that a public outcry forces them to go underground and live normal lives, in a sort of witness protection program.  There’s a note of realism there that contrasts with the usual comic-book conventions.  We see it again when the business of creating the colorful costumes itself turns out to require expertise worthy of James Bond’s Q—giving us Edna Mode as an independent contractor (and style maven).

This issue of collateral damage seems to have preoccupied superhero movies a lot in recent years.  It’s a primary plot driver in both Captain America:  Civil War (2016) and Batman v. Superman (2016).  But The Incredibles was there first, twelve years earlier.  What that says about contemporary attitudes is something at which we may want to take a closer look, another time.

The first question that arose when a sequel was announced was, where do they go from here?  Of course, superheroes are almost by definition open to continuing adventures.  And The Incredibles ended with an obvious starting point for another story:  the appearance of a new villain, the Underminer.  But at the end of the first movie, the character arcs, the development of the main characters, had all been neatly completed.  Could the director and screenwriters come up with something equally good from that starting point?

The answer was always:  if anyone could pull that off, it’d be Pixar.

I enjoyed The Incredibles 2 immensely.  I’ll have to let it settle for a while to evaluate how it stands with respect to its classic predecessor.  But the movie is a lot of fun, and it manages to carry forward a story that’s consistent with the first movie, yet departs from it enough to avoid simply repeating the original.  As we’ve seen, this a tricky business.

Despite the fourteen-year gap in realtime between the first and the second movie, the latter picks up exactly where the former leaves off, with the appearance of the Underminer.  This tunnel-drilling villain is an obvious shout-out to Marvel’s Mole Man, who was introduced in the very first issue of The Fantastic Four.

Since the Incredibles have always been a kind of retake of the F.F., the Mole Man connection has a pleasing nostalgia aspect for the long-time comic-book fan.  There’s a similar homage to the F.F. in Kurt Busiek’s Astro City comics—a superhero group called the “First Family.”  (Their last name is actually “Furst,” making them another instance of the proverb that the last shall be Furst, and the Furst shall be last.)  Busiek, incidentally, may have been the first graphic novelist to highlight the collateral damage question; the matter of “everyday life in a superhero universe” is treated not only in Astro City (which started in 1995), but also in his revisiting of the Marvel universe, the limited series Marvels (1994).

The time lapse (realtime) between Incredibles 1 and 2 is less disruptive than one might imagine, because both movies are set in an alternate past, not in our present.  One article concludes that the main action of The Incredibles takes place in 1962, based on a newspaper date.  This fits with the fact that Brad Bird’s inspiration for the film came from the comic books of the 1960s.  The time period is visible in the charmingly retro designs of the homes and cars in the original movie, not to mention the big rocket used by the villain.

So we’re not disturbed by the fact that the characters in The Incredibles (1 or 2) don’t carry around cell phones or use personal computers.  There are, of course, computers and other high-tech devices in both movies.  But this is consistent with the standard comic-book depiction of advanced technology in the hands of certain individuals or groups, as opposed to the society as a whole.  (This convention also applied in other adventure stories, like the Saturday morning cartoon Jonny Quest, one of my childhood favorites, which makes a brief appearance onscreen in The Incredibles 2.)  We might see high-powered computers and such in the Batcave, or a villain’s lair—or even in some hidden country, like Marvel’s Wakanda (which first appeared in 1966).  But these were always “islands” of high technology, having no effect on the technological level of the overall culture.

There is a subtle difference between the 1960s depictions of advanced technology and what we see in the Incredibles movies, which may throw us off a bit.  A 1960s-era imaginary supercomputer looked like an extrapolated version of 1960s-era mainframe computers.  One thinks of old James Bond movies showing computers ornamented with slowly rotating tape drives, which now look ludicrously anachronistic.  But this nostalgic re-creation of 1960s-era high-tech has the advantage of knowing how the future actually turned out.  Thus, in an early scene from the first movie, Mr. Incredible is tracking a car chase in his Incredimobile—and the electronic tracker looks not unlike a GPS, albeit one with primitive graphics.  When Mirage sends a “This message will self-destruct” recording to Bob, it’s on a tablet strangely reminiscent of a modern iPad.  In effect, the movie designers are reimagining the imagined future of the 1960s, by reference to the actual future (our present).  The mind boggles a bit.

All in all, The Incredibles 2 does a very good job of resuming the story fourteen years later with a minimum of retcon.  Compare Back to the Future II, which required a distinct revision of the closing scene from the first movie, only four years after episode 1 was released.

There were a couple of things I didn’t quite expect in the transition from the end of episode 1 to the beginning of episode 2.  But they weren’t really retcons—more like things I’d assumed at the end of The Incredibles that turned out not to be quite so simple.  These aren’t really spoilers, since they become apparent almost at once in the new movie. 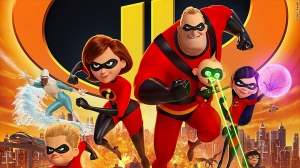 The Parr family and Frozone are publicly acclaimed for defeating Syndrome in episode 1, but that doesn’t mean they’re out of the woods yet.  The anti-supers law still hasn’t been reversed.  When the story was wrapped up in a single movie, we would reasonably assume that such things would automatically be resolved after the movie ended, just as we assume that the main characters’ romance will proceed swimmingly when a movie fades out on a kiss.  But there’s still work to be done on society’s acceptance of supers in The Incredibles 2.

Then there’s baby Jack.  We saw Jack exhibit a variety of assorted superpowers in the first movie and the associated short subject (“Jack-Jack Attack”).  But his family didn’t quite see that; they don’t yet know he has superpowers.  Of course, as the trailers make clear, they find out pretty soon . . .

I heartily recommend the sequel; most fans of The Incredibles should enjoy this follow-up.

And one bit of practical advice for the moviegoer:  the closing credit graphics are entertaining, but there’s no need to wait around for the very end.  Our 1960s-ish superhero family has not yet adopted the modern practice of putting a “stinger” scene at the conclusion of the credits.

3 thoughts on “An Incredible Sequel”