We love our alien invasions.  Since The War of the Worlds (1897), poor Earth has suffered a steady stream of hostile arrivals—frequently from Mars, but recently from farther afield, as the possibility of other intelligent life in our solar system wanes.

We have one coming up this month, with the June 24 movie premiere of Independence Day:  Resurgence, a sequel to one of the more successful invasions of the last twenty years.  It seems like a good time to look closely at our opponents. 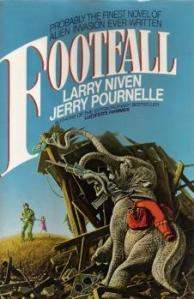 Footfall, a 1985 novel by Larry Niven & Jerry Pournelle (still available in print), is not only a great yarn, but a textbook model of how to write a modern invasion story.  We can look at it as a test case, like an existence proof in mathematics:  What kinds of conditions have to be fulfilled for a believable alien invasion, given what we now know about other planets?

Let’s define the target.  We’re talking about the good old classic invasion story, where the bad guys show up in person, make a direct assault, and we beat them.  That isn’t the only possibility.  There are other variants, such as infiltration, or scenarios where the Earthlings lose and end up a subject species.  But let’s look at what premises make a triumphant Independence Day-style plot viable.

It was easy for Wells.  His relatively nearby Martians could fire off a series of cannon shells, more or less, to land on Earth, break out their tripods, and mount their campaign.  Wells’ tour de force ending, of course, has the Martians beaten not by human opposition, but by humble bacteria.  (Arguably the best moment in the original Independence Day is when Jeff Goldblum realizes we can best the enemy by using a contemporary analogue of the Wellsian microbes—a computer virus.)

But modern invaders have to come from a greater distance.  Regrettably, none of the plausible abodes of life in the solar system have panned out.  Gone are old-time SF’s sweltering jungles of Venus, the canal-crossed deserts of John Carter’s Mars.  Until we’re ready for an attack by potential microbes from Europa, or hypothetical floating denizens of Jupiter’s atmosphere—neither of which, if they exist, have shown any signs of capability for interplanetary excursions—we have to look to interstellar sparring partners for a really good invasion.

This intensifies a long-standing problem with invasion stories.  If they got here, and across the interstellar gulfs at that, their technology must be literally light-years ahead of ours.  How can we expect to beat critters with such vastly advanced technology?  The balance of power is inherently skewed against us.

Paired with this is the question of motivation.  Why are they here?  What do the invaders want that would drive them to come all the way to Earth for it?

This is the easiest place for invasion stories that aren’t built on sound science to go astray.  We need only mention the 1983 TV mini-series “V,” which, though it had many admirable aspects, fell sadly short on the science side.  V gives not one, but two, implausible motives for the seemingly-benevolent Visitors.  They’re here to steal Earth’s water—as if there weren’t vast amounts of ice scattered around our solar system, and probably most other systems, for the taking.  And they’re here to eat us; apparently not only are humans compatible with a completely alien biology, but we’re a tastier treat than more edible and obtainable animals.  Sensible extraterrestrials need a better reason to traipse across the light-years than a local hamburger shortage.

Niven & Pournelle’s epic adventure handles both these questions so beautifully that it might have been plotted specifically to answer them.

Our not-quite-friendly visitors, the fithp (the singular is fi’), arrive in a large interstellar vessel, which launches smaller ships to conduct the attack.  Why are they here?  They’re looking for Lebensraum — living space.  The fithp have been exiled from their homeworld as the result of a conflict among factions—like the Protectors in Niven’s novel Protector.  They need a new place to live.  Among other things, this means “defeat is not an option”:  they can’t go back.  That ups the stakes.

But this exile premise also solves some of the balance-of-power problems.  The fithp’s resources are strictly limited.  There won’t be any reinforcements.  They can’t bring anything more from their homeworld.  All we have to do is defeat this batch of opponents, and we win.

Niven & Pournelle strengthen this limitation on the aliens, and incidentally increase scientific plausibility, by making their mother ship Message Bearer a slower-than-light vessel — a Bussard ramjet.  Their journey takes decades.  This distances the fithp even further from any potential homeworld support.  The authors also use it to introduce another twist:  there’s dissension between the space-born fithp, on one hand, and those who lived on their homeworld and are now awakened from suspended animation, on the other.  This division becomes important as the plot develops.

Without having to account for faster-than-light travel, Niven & Pournelle can give the fithp technology that isn’t too far ahead of our own.  Human numbers—and political, psychological, social characteristics—can make up for the technological imbalance.

In addition, the fithp don’t fully understand their own technology.  They’ve learned a lot of it from records left by their Predecessors, rather than developing the science themselves. This makes them less able to innovate.  By contrast, the humans’ response is a masterpiece of improvisation.  We make the best of what we have.  This, too, helps even the scales.  (Lesson for humans:  Continue fostering that STEM education.)

In the course of this worldbuilding, Niven & Pournelle give us fully fleshed-out aliens, with a coherent culture and society, understandable but different from our own — not an easy task.  Among other things, the fithp are sympathetic characters.  They are people, not just faceless attackers.  We see events from their viewpoints as well as our own.  This makes the story not only more believable, but more interesting.

The original Independence Day scores modestly on these two plausibility counts.  Motivation:  The aliens travel the stars like locusts, stripping planets of their resources.  No details are given, but the basic idea is not unreasonable, particularly in light of contemporary environmental concerns.  Balance of power:  We’re hopelessly behind in technology—but the aliens’ laziness (using our own satellites for signaling), Goldblum’s bright idea, and a captured alien ship get us (barely) over the hump of the willing suspension of disbelief.

We’ll see shortly how these premises play out in the Independence Day sequel—applying the Niven & Pournelle standard.

2 thoughts on “How to Stage an Alien Invasion”