There’s a lot happening on the Moon, it seems.  In the last several months I’ve read three different novels about the first lunar colony.  And they really are recent:  all three were published in 2017.  “The world is too much with us,” perhaps—but in any case the Moon seems to be very much with us at the moment.

The stories come from very different points of view.  We talked last time about Andy Weir’s Artemis, which gave us a cynical young woman’s view of a thriving lunar city built on tourism, complete with smugglers, mobsters, and mayhem.  As we saw, Artemis illustrates anything but the clean-cut NASA world of its predecessor The Martian. 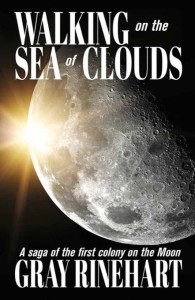 Gray Rinehart’s Walking on the Sea of Clouds follows two married couples, Stormie and Frank Pastorelli and Van and Barbara Richards, as they train for places at the first Moon base.  The base is bankrolled by the Asteroid Consortium, multinational venture capitalists whose primary interest is in asteroid mining.  The story revolves around the four main characters—how the lunar venture motivates them and affects their relationships.  So much of the book involves training and preparation that it might be called a “science procedural,” on the model of the “police procedural” that focuses on the methodical work of a police investigation rather than the high-profile antics of private detectives. 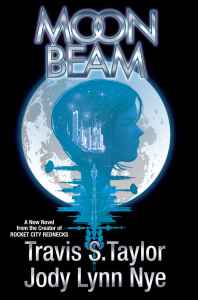 Our third sample is Moon Beam, by Travis Taylor & Jody Lynn Nye.  This is a middle-grade (MG) novel whose hero, sixteen-year-old farm girl Barbara Winton, is selected to join a group of brilliant young students under the wing of Dr. Keegan Bright, a Carl Sagan-like science communicator with a popular Webcast and a world-wide following.  Bright and his students happen to be based at Armstrong City, the first moon colony.  Barbara ends up taking the lead in a pathbreaking expedition by the “Bright Sparks” to set up a huge telescope on the far side of the Moon.  The young people must cope with unexpected dangers on the way.  (Unexpected by the characters, that is; readers will of course be primed to anticipate something more than mere routine.)

Despite their difference in tone, the three books have a lot in common.  There’s a good deal of serious science in each one, though it properly stays in the background and doesn’t slow down the plot.  The science is solid, too:  none of the stories extrapolates far beyond technologies that we can practice, or reasonably predict, today.  Nobody discovers a monolith left behind by mysterious aliens or discovers any exotic principles of physics (unless one counts the hypothetical “E-M” drive mentioned glancingly in Moon Beam).

The stories also share the assumption that private enterprise will play a leading role in creating these moon colonies.  We saw that Weir’s Artemis is founded by the nation of Kenya, but as a venue for private businesses.  Rinehart’s lunar base is funded by private corporations.  Moon Beam doesn’t pay a lot of attention to how Armstrong City as a whole is operated; we spend almost all our time with Dr. Bright and his teenagers, who essentially constitute a private STEM demonstration project.

What’s with this rash of lunar narratives?  Why is a permanent home on the Moon on our minds at this particular moment?  Three examples is barely enough for a trend, of course.  But half the fun of these observations is the chance to try out a wild extrapolation and see where it leads.

There was a surprising amount of popular interest in last year’s lunar eclipse—but that doesn’t explain why these books were already in the publishing pipeline for 2017.  That astronomical attentiveness probably shares whatever is the cause of the booming market for moon stories.

Nor is the reason likely to be found in the sporadic statements from NASA or the federal government on the subject.  The last several Administrations have been promising us the Moon, or Mars, on a regular basis, and we’re nowhere nearer either planet(oid) as a result.

But one thing has changed over the last five or ten years.  We have a number of private ventures aiming at space travel, spearheaded by wealthy visionaries like Jeff Bezos and Elon Musk.  Bezos’ Blue Origin (whose name “refers to the blue planet, Earth, as the point of origin,” according to Wikipedia) and Musk’s SpaceX (whose full name is “Space Exploration Technologies Corporation”) have made significant strides toward actual human spaceflight.  They suggest a new kind of outward path, driven by private enterprise rather than government projects.  That shift dovetails with the United States’ own policy of relying on private companies (or other countries) for launch services in the post-Space Shuttle era:  space as a business venture looks considerably more promising with the government as an anchor tenant.

There’s plenty of science fiction precedent for private trips to the Moon.  The first moon flights are made by private parties in Heinlein’s novella “The Man Who Sold the Moon” (1951) and its juvenile counterpart, Rocket Ship Galileo (1947).  But it was NASA that carried out the real moon flights.

I grew up thinking of NASA as the natural venue for space exploration.  But that was never supposed to be a permanent role.  NASA’s job is to carry out the experimental work that provides the foundation for commercial aeronautics—and astronautics.  Maybe we have arrived at the moment where the venture of expansion into space can be handed off to ordinary business enterprises.  And maybe that’s turning our thoughts toward seeing the Moon as a place to live and work—not just to reach once upon a time.