In our last exciting episode, we noted that fantasy and science fiction stories often seek to transcend the boundaries of human experience—to show us things beyond our ordinary understanding.  Take it further:  the author may wish to present things that are beyond all human understanding.  How do we get across to human readers, or viewers, something that we’ve just postulated as indescribable or incomprehensible?

We’re not asking whether there can be things the human intellect or senses cannot grasp.  Kant or Aquinas, for example, would have rather complex answers to that question.  Rather, we’re focusing here on how to put the ungraspable into a story. 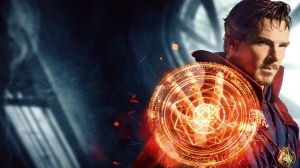 There are plenty of things that are impossible, but easy to describe; we can detail how they appear to our senses, though explaining how they can actually occur is another matter.  For example, magic spells cast by Doctor Strange frequently manifest as flat discs suspended in space, generally with symbols or letters inscribed.  Both the comics and (using CGI) the movies can show us these with no problem.  That’s not what we’re interested in here.

What’s intriguing is a sensory experience different from any we normally experience (or, perhaps, can experience).  In James Schmitz’s The Witches of Karres, our hero Captain Pausert, who is just beginning to exhibit witch powers, detects an extra-universal entity called a “vatch.”  His young witch companions have referred to “relling” a vatch, but this is the first time Pausert himself has had the experience: 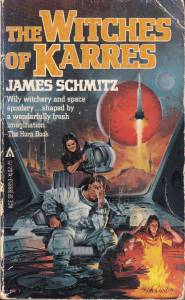 It was something like smelling a grumble, or hearing dark green, or catching a glimpse of a musky scent.  As Goth had suggested, it was not to be described in any terms that made sense.  But it was quite unmistakable.  He knew exactly what he was doing—he was relling a vatch.  (ch. 9, p. 250)

I tried this same technique of combining nonsensical sensory references to suggest something magical about spell-casting music in my short story The Green Song.

While Schmitz chooses to present this supernormal power as “magic,” such special powers can just as well be described in science-fiction terms (often as “psionic” powers), which is how we normally use words like “telepathy” and “telekinesis.”  Though it’s worth noting that fantasy characters like Gandalf and Galadriel can “speak mind to mind” as well—they just don’t call it telepathy.

I’ve just finished The Pursuit of the Pankera, a recently-discovered earlier version of Heinlein’s The Number of the Beast which takes off in a quite different direction.  In chapter 38, one character, Deety Burroughs Carter, meets a Lensman from E.E. Smith’s Lensman series and tries to describe the famously indescribable Lens itself:  “The nearest I can think of is an enormous fire opal with a light behind it—but take that and cube it.  It’s all colors and the colors keep changing and the lights come from the Lens itself and dance like a color organ but brighter and more alive—and I still haven’t described it.”

Heinlein’s method is instructive.  In this brief passage, we start with a known image—fire opal—and are told to extend it in an unspecfied way (“cube it”).  The second sentence is a run-on, piling image on image in a way that suggests an inability to capture the item in any single description.  She finishes by apologizing that the result is still inadequate (“I still haven’t described it”).

An extraordinary experience like Schmitz’s “relling” is neutral—just an unfamiliar new sense.  But once we’ve postulated the non-natural, it’s easy to transition to the “unnatural,” in the pejorative sense of the term.

I recently revisited H.P. Lovecraft’s short story The Colour Out of Space (1927)—the only Lovecraft piece I’ve ever actually read.  According to the story, a meteorite arrives on earth in 1882, in the Arkham area (there’s a reason why the lunatic asylum in Gotham City is called the “Arkham Asylum”).  Weird growths emerge from the meteorite and transform plants, animals, rocks, water, and humans in horrible ways.  The creatures so affected are characterized by an unearthly color, first noticed in globules in the meteorite:  “The colour, which resembled some of the bands in the metetor’s strange spectrum, was almost impossbile to describe; and it was only by analogy that they called it colour at all” (p. 150 in the anthology I have).  Skunk cabbages infected by this influence are described unpleasantly:  “. . . they held strange colours that could not be put into any words.  Their shapes were monstrous, and the horse had snorted at an odour which struck Stephen as wholly unprecedented.”

The notion of extra colors that can be seen with ordinary vision is dubious, given what we now know about neurobiology and the electromagnetic spectrum.  But the notion does communicate a sense of the weird and unnatural.  That’s what Lovecraft was driving at, according to Wikipedia—“to create an entity that was truly alien.”

More important, Lovecraft, like other horror writers of the pulp era, was quick to treat the incomprehensible as evil, or at least destructive to humans.  If you’re writing horror, I suppose that comes naturally.  But it isn’t a necessary conclusion.  Something not naturally perceivable could be neutral, as in Karres—or it could also be incompehensibly good.

The Extraordinary and the Supernatural

An extra sense or a psionic talent would be beyond ordinary human capabilities, but not beyond the range of nature itself.  Those powers needn’t be good or evil—just neutral, like most human abilities, able to be used for good or bad purposes.  Bur we’re especially likely to run into the indescribable when we speak of the supernatural.

The supernatural tends to have an evaluative charge, so to speak:  either good or evil in itself.  Lovecraft’s unnatural horrors tend in that direction; he doesn’t describe them as theological, exactly, but they’re definitely horrible (at least to humans).  Something supernally good, however, may be just as difficult to describe.

At the end of C.S. Lewis’s Perelandra, two eldila—planetary angels of a sort—ask Ransom, the main character, in what form in which they should appear to do honor to the new human masters of the planet.  Their first attempts aren’t very successful:

A tornado of sheer monstrosities seemed to be pouring over Ransom.  Darting pillars filled with eyes, lightning pulsations of flame, talons and beaks and billowy masses of what suggested snow, volleyed through cubes and heptagons into an infinite black void.  “Stop it . . . stop it,” he yelled, and the scene cleared.  He gazed round blinking on the field of lilies, and presently gave the eldila to understand that ths kind of appearance was not suited to human sensations.  (ch. 16, p. 197-98)

Lewis handles the incomprehensible by referring to some familiar things, but placing them in unexpected or incoherent contexts (darting pillars, with eyes; bird imagery and pure geometry).  He also uses Ransom’s reaction, as Lovecraft used the horse’s reaction to an “unprecedented” smell, to evoke the strangeness and unbearableness of the experience.

Madeleine L’Engle is also talking about angels, more or less, in The Wind in the Door (sequel to A Wrinkle in Time) when she introduces a being called Proginoskes.  The human characters first see—

wings, it seemed like hundreds of wings, spreading, folding, stretching—
and eyes
how many eyes can a drive of dragons have?
and small jets of flame

These examples occur in a theological context, but they’re not good or evil themselves.  Lewis and L’Engle are showing us that creatures of a different kind may be beyond our perception.  But in some cases there emerges a sense that the very goodness of something may exceed our ordinary knowledge.

Lewis’s The Great Divorce adopts the fanciful notion that souls from Purgatory or Hell (or both) may be allowed a “vacation” in the lower realms of heaven.  Our narrator, one such soul, finds that heaven is not the vaporous or cloudy region we sometimes imagine; on the contrary, it is more solid and more real than lower things.  Blades of grass are so solid that  don’t bend under the feet of the visiting shades (ch. 3, p. 27); the rain so substantial that it penetrates them like bullets; the flowers are hard like diamonds.

The men were as they always had been; as all the men I had known had been perhaps.  It was the light, the grass, the trees that were different; made of some different substance, so much solider than things in our country that men were ghosts by comparison.  (p. 28)

Simply being in this region causes the narrator’s sensory capacity to expand.

. . . something had happened to my senses so that they were now receiving impressions which would normally exceed their capacity.  On earth, such a waterfall could not have been perceived at all as a whole; it was too big.  Its sound would have been a terror in the wood for twenty miles.  Here, after the first shock, my sensibility ‘took’ both, as a well-built ship takes a huge wave.  I exulted.  (ch. 6, p. 49)

Lewis’s evocation of strangeness here is in the service of a theological point:  he wants to demolish our tendency to think of the spiritual as less real than the solid earth and propose that it is more real.

In a similar way, G.K. Chesterton suggests that ordinary objects can be subtly transformed for us—can appear to a greater degree as what they are—when we are transformed by the dawn of love.

The difference between this experience and common experiences was analogous to that between waking life and a dream.  Yet he did not feel in the least as if he were dreaming; rather the other way; as waking was more actual than dreaming, so this seemed by another degree more actual than waking itself.  But it was another life altogether, like a cosmos with a new dimension.  (The Ball and the Cross, ch. 9, p. 111)

As Lewis’s Heaven reverses our usual reactions to indicate something more substantial than our ordinary world, Chesterton reverses the usual relationship of dream and reality to imagine a vita nuova more awake than waking.

Finally, attempting to show us complete transcendence at the very end of the Narnian books, Lewis can only fall back on very rough metaphors and, again, a confession of inadequacy.

“’The term is over:  the holidays have begun.  The dream is ended:  this is the morning.’ . . . but the things that began to happen after that were so great and beautiful that I cannot write them.  And for us this is the end of all the stories, and we can most truly say that they all lived happily ever after.  But for them it was only the beginning of the real story.”  (The Last Battle, final pages)

From these examples, we can throw together a list of some techniques used to evoke the incomprehensible.

Such methods may be helpful if we want to write about what is beyond description.  They might even be of some use in interpreting our own experience if we should encounter such things ourselves . . . which is never entirely out of the question.

10 thoughts on “Describing the Indescribable”