Last time we talked about the sequels to the movie Tangled.  But I didn’t say anything about the music.  One song in particular deserves a comment of its own.

Music in the Movies

“I See the Light”

Disney generally gets good composers to do the music for its major movies.  Tangled was especially productive; I already had on my playlists the charming love song “I See the Light” (video here), and the end-credits song (is there a name for that niche?), “Something That I Want” by Grace Potter.

The theme song for the TV series actually premiered in the short film Tangled:  Before Ever After.  “Wind in My Hair” deftly expresses Rapunzel’s excitement as she anticipates continuing to discover the wide world outside her tower—the “endless horizon.”  And there’s a bit of humor in the title:  who, after all, is more suited to having the “wind in her hair” than Rapunzel?

“Put On Your Sunday Clothes”

“Wind in My Hair” falls into a category that TV Tropes calls “Setting Off Songs,” like “We’re Off to See the Wizard,” or “Put On Your Sunday Clothes” from Hello, Dolly!.  There’s always a certain excitement when people are getting started on a journey, be it an epic trip to the Emerald City or just a Sunday jaunt to New York City.  In keeping with Rapunzel’s character, “Wind” is upbeat and optimistic, adding to its charm.

But Rapunzel has much farther to go than we see in the short movie, or the first season of the series.  Most of those stories remain inside the Kingdom of Corona.  It’s at the beginning of the second season that Rapunzel and company set out into the real terra incognita outside the kingdom.  And at that point we get yet another expeditionary song, one that simply knocked me over.  Hence the inevitable reflection:  why do I love this song?

“Next Stop, Anywhere,” by Alan Menken and Glenn Slater, is a Setting Off Song squared and cubed.  It appears initially in Season 2, Episode 1, at about 3:23.

Rapunzel has a mission:  to backtrack the ominous black rocks that began to appear in the short film.  The prologue to S2E1 gives us some rather grim history hinting at what she’s going to find.  But when we flick back to Rapunzel and her True Companions in the present day, she’s mostly excited about venturing into the outside world (“It’s our first big city outside of Corona!”).

The song starts with a fast, steady beat, and a series of flute trills, which suggest movement and vigor along with the sunny lightness characteristic of our heroine.  The visuals of a hummingbird and a field of flowers reinforce the musical cue.  Rapunzel leaps out of their ambling caravan and races around in a montage, observing the heavens, using her hair to climb a giant tree, dashing off her signature paintings, turning cartwheels.  The refrain comes in with a bouncy drumbeat that bears out the lyric:  where might we be going next?  Anywhere!

The steady beat continues throughout the following mix of dialogue and singing.  Rapunzel’s enthusiasm is indomitable.  Her romantic interest Eugene is not quite as keen on following “a bunch of creepy rocks” into the unknown; but at Rapunzel’s wry loving look, he has to admit that of course he’s excited:  “I’m with you!  What else could I be?”  He alternates lines with her in the next verse, and they both participate in the next series of acrobatic misadventures.  The theme of first love is an additional source of excitement. 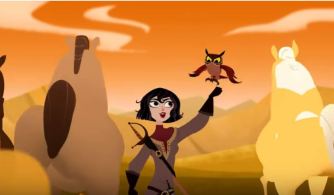 The pointy black rocks turn up from time to time as they cross the landscape, but Rapunzel and Eugene ignore them; at this point their grim purpose seems trivial.  That theme of leaping over the difficulties to focus on the adventure is refreshed when the caravan, driven by the wary Cassandra, catches up with them (2:05).  Cass admonishes Rapunzel for running off and warns her that “the real world isn’t all fun and games.”  Doesn’t matter.  The song resumes, and even Cassandra can’t resist singing a line or two.  Rapunzel is going to seek out her destiny, but that will cause her to grow:  “find the best in me.”

As the canny viewer may have expected, Vardaros, the “first big city” they encounter, falls disastrously short of expectations.  One character narrowly dodges death, and another, marriage.  The mystery warrior Adira turns up with more ominous warnings about where they’re going.  They’re not ready to move forward again until the end of the second episode (listed on the Web pages as Part II of Episode 1).  (Actually, they spend another couple of segments in Vardaros anyway, but the reprise of “Next Stop” occurs in the second episode at about 20:50.)

The music starts with a tensely suspended organ tone.  Then, over a somber bass note, Eugene begins singing more slowly—but his words are expressing determination to continue.  Rapunzel joins in, and they clasp hands.  As the music speeds up and brightens, they invoke their faith in each other.  By the time we reach the refrain, we’re back to full speed and full strength.  The “with you close to me” line expands visually to include Cassandra and the others:  they can overcome the coming obstacles with not only the power of love, but the power of friendship.  Even the serious aspects of the journey give way to the boundless exuberance with which the original song started.  The music, as well as the lyrics, firmly rejects somberness in favor of joy—like the opening passages of the fourth movement of Beethoven’s Ninth Symphony:  not by ignoring the dangers and difficulties, but by acknowledging and surpassing them.

The theme of exploration and discovery is a favorite of mine, and the Setting Off Songs tend to live and move in that theme.  “Out there . . .” is exactly how “Put On Your Sunday Clothes” begins.  We don’t yet know what’s out there, but we’re eager to find out.

The theme isn’t confined to songs, of course.  The iconic opening of the original Star Trek series and its Next Generation sequel hit exactly that note, invoking the “sense of wonder” SF is famous for:  “The final frontier . . . To seek out new life and new civilizations.”  To my mind, the intro to the “Star Trek:  Enterprise” series is even better, with its sequence of daring steps in exploration (real and fictional) over inspiring music.  Similarly, the best scene in the unfortunate first Star Trek movie occurs at the very end, at about 1:30 in this clip.

‘Let’s see what’s out there.’  That attitude, it seems to me, is highly to be prized:  with the sense of incipient wonder, the expectation of finding amazing things, and some degree of confidence in our ability to deal with them.  (Chesterton said, “Man must have just enough faith in himself to have adventures, and just enough doubt of himself to enjoy them”—Orthodoxy, ch. 7.)

It’s important that we be able to see the trials and perils of life as an adventure, not merely an imposition.  That attitude is one of the essential factors in a mature human personality, and it merits perennial refreshing and reinforcement.  That’s why “Next Stop, Anywhere” is so pleasing:  it hits just the right note.

And besides, it’s a cool song.