I’m excited to have my romantic comedy novella The World Around the Corner in print as of last week.  Or in virtual print, at least; it’s out as an e-book from the Wild Rose Press.  (Details are available on the story’s page.)

Uncharacteristically for me, TWATC isn’t science fiction or fantasy.  The only potential SF elements are some very minor advances in gaming technology (and perhaps in automobile design).  Some parts read a little like fantasy, because there’s an online role-playing game (an MMORPG) involved.  In that respect there’s a faint resemblance to Ready Player One (book and movie), where an online game plays a major part in a much more serious SF story.  But TWATC isn’t really about games or technology; it’s all about having fun with the characters.

I’ve always liked the kind of romance where a character has to make a discovery about who their romantic interest really is.  Jasmine isn’t immediately aware that Disney’s Aladdin, when he visits the palace as a prince, is the same street urchin she’s already met—though she isn’t fooled for long.  In Shakespeare’s venerable Twelfth Night, nobody is quite sure who “Cesario” (Viola) really is.  The same is true in the modernized high-school variant of the Shakespeare comedy, She’s the Man.  Playing around with two ways of knowing the same person is also put to good use in the case of super-heroes (or heroes generally) who have secret identities, from the Scarlet Pimpernel to El Zorro to Superman.

But in all these tales, one member of the couple has the advantage of knowing the truth.  It puts the couple on more even terms if neither of them is aware of what’s really going on.  There’s a whole series of variations on a single story where the main characters meet indirectly and fail to connect up the two different ways they’re communicating with the same person.  This plot seems to have been invented by Hungarian playwright Miklós László in the form of a play called Illatszertár or Parfumerie (1937).  It was adapted in English into the Jimmy Stewart-Margaret Sullavan film The Shop Around the Corner (1940), which in turn gave rise to a musical treatment with Judy Garland, In the Good Old Summertime (1949), and again with She Loves Me (1963).  In these versions, the main characters are pen pals, and also co-workers.  Nora Ephron updated the treatment by making them e-mail correspondents in You’ve Got Mail (1998).

When we tell the story of a romance, we’re often telling a story about something else at the same time.  To be sure, this isn’t always the case.  In Georgette Heyer’s Cotillion, for example, or in Must Love Dogs, and in a lot of high-school rom-coms, the personal relationships are pretty much all that’s going on.  But generally, we don’t spend our lives doing nothing but looking for love.  We go on about our daily business, meeting our daily challenges, and stumble upon love as we go. 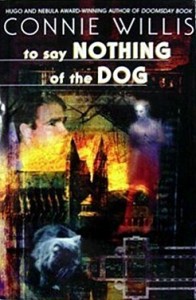 So a lot of romantic tales also have a storyline dealing with something that brings the couple together.  In Heyer’s The Toll-Gate, there’s an involved plot having to do with a theft of currency.  The main characters in Connie Willis’s To Say Nothing of the Dog are searching for the bishop’s bird-stump.  (It’s a long story.)  Gaudy Night is the Dorothy Sayers novel where Harriet Vane and Lord Peter Wimsey finally get together, but they do it while trying to resolve a crisis at her alma mater.  The redoubtable Amelia Peabody and her future husband Radcliffe Emerson meet in the context of archaeological investigations (Crocodile on the Sandbank).

I like the idea of a couple’s bonding by cooperating in some shared endeavor.  And we may be able to amplify that motif by having it happen twice, in parallel, like the parallel identities in the “Shop” stories.

The Camaraderie of the Quest

One of the things I’ve always enjoyed about the group quests of role-playing games, whether in D&D or World of Warcraft, is the bonding and sense of camaraderie that develops in a group working together for a common purpose.  Most traditional games like chess or Risk have the players competing against each other.  But the role-playing games typically pit a band of True Companions against third-party monsters or other opponents.

This is a whole different dynamic.  And seeing it play out in a game makes the tone both more light-hearted and more detached than, for example, in a real-life business relationship.  But for that very reason, it lacks a certain gravitas.  Suppose a couple used to fighting side-by-side in a game found they had to work together on something important in real life as well?

The Fun of the Shared Adventure

All this contributed to the idea of The World Around the Corner.  Other aspects also played their roles—for instance, a chance to share some favorite music and books.  And let us not forget the occasional opportunity, sheerly by happenstance, to achieve a truly dreadful pun, without even setting it up on purpose beforehand.  You’ll know it when you see it . . .

I hope you’ll have as much fun reading TWATC as I did writing it!