Science-fictional ideas have been gradually percolating through our popular storytelling and entertainment for years, as I noted at the beginning of these observations.  One example is the idea of time dilation—that time passes more slowly at very high velocities—in the theory of relativity.  The classic illustration is the “twin paradox.”  We can trace this image from the science itself, through a classic novel, to—of all things—a rock song.

Those who are already familiar with relativistic time dilation can skip to the next heading.  Otherwise, here’s a rough layman’s explanation of the phenomenon:

One of the consequences of Einstein’s theory of relativity, noted as early as 1911, is that time passes more slowly as we approach the speed of light.  More precisely, a clock (or other process) that’s moving at a high velocity, relative to the observer, will be seen to operate more slowly than a clock in the observer’s own reference frame.  If I sit in my comfortable lab on Earth and watch what’s happening on a spaceship accelerating away from the Earth, I’ll see the spaceship’s clock running slower and slower, falling further and further behind the clock on my wall.  The closer to the speed of light (usually symbolized as “C”) the spaceship gets, the greater the discrepancy—the “time dilation.” 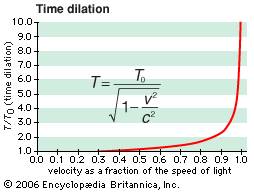 This isn’t an illusion.  When the spaceship eventually returns to Earth, I’ll find that the traveling clock is behind the stay-at-home timepiece.  The same is true for living organisms.  If I planted a pair of trees before the ship left, the tree that made the flight may still be a sapling when it returns, dwarfed by its towering ‘sister’ on Earth.  If you’d like the math, the Wikipedia article on the twin paradox gives an example for a trip to the nearest star, Alpha Centauri.

As with most of the peculiar consequences of relativity, we don’t notice such differences in ordinary life because they’re so small as to be undetectable at the speeds and scales we normally deal with.  But if we look closely enough, the same effects are observable.  Even the humble GPS app on your smartphone has to take into account the slowdown of the clocks on the GPS satellites, which move slowly compared to C but fast enough that the very precise positioning signals are affected.

Early on, physicists came up with a vivid illustration involving a pair of twins.  If one twin takes a trip at near-lightspeed, she will end up younger than the twin who stays home.

At low velocities, the difference will be unnoticeable.  A twin who spends a few months on the International Space Station will come back slightly younger than the stay-at-home twin, but only slightly.  Up the velocity, though, and we up the ante.  It would be quite startling, by normal standards, if the astronaut twin were still college-age while the earthbound twin were ready for retirement.

Robert A. Heinlein’s 1956 young adult novel Time for the Stars does exactly this:  it makes a story out of the twin paradox. 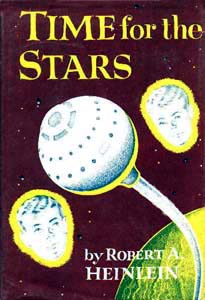 Tom and Pat Bartlett are teenagers growing up centuries from now.  Tom is our viewpoint character.  Pat is the “dominant” twin:  he always seems to end up with the bigger piece of pie.

In this future, population pressure is extreme.  The Long Range Foundation commissions twelve near-lightspeed “torchships” to look for colonizable planets among the nearby stars.  The LRF has discovered that certain pairs of twins can communicate with each other instantaneously, by telepathy (which baffles the physicists no end, since that’s theoretically impossible).  This gives the LRF a way for the starships to get their findings promptly back to Earth, and incidentally explains what an average teen is doing aboard an interstellar exploratory ship.  One twin goes abroad; one stays home.

Heinlein’s characteristic mixture of sound scientific detail and relatable characters makes the novel a highly engaging story.  We see the finagling by which it’s decided which twin (Tom) goes to space.  We get a vivid picture of life aboard a starship that will travel independently for years (even according to its own time frame)—which is where I first learned the word “ecology.”  We see strange worlds and watch how the people aboard the Lewis and Clark (known to its passengers as the “Elsie”) interact.

Time dilation is described with realistic detail.  As the Elsie approaches the speed of light (never quite reaching it), Tom has to “speak” to his brother more and more quickly, and Pat on Earth has to communicate more and more slowly, because their time frames are increasingly out of sync:  “he complained that I was drawling, while it seemed to me that he was starting to jabber” (ch. 11, p. 113).

But it’s the age difference that makes things really difficult.  At the end of the first near-lightspeed jump, Pat is eleven years older than Tom and has a seven-year-old daughter, Molly.  It becomes harder for Tom and Pat to connect; they’ve grown apart to the extent that they now have little in common.  Fortunately, it turns out that the twins’ connectedness can sometimes be passed on (stretching the original concept considerably):  Tom can communicate with Molly as well.  As time goes on, Tom’s connection with Earth is increasingly through his brother’s descendants, though Pat is still alive.

The Lewis and Clark’s expedition ends when she’s met by a new ship from Earth.  Based on investigations into the instantaneous telepathy, scientists have developed a new theory that allows for an “irrelevant” space drive—one that can whisk the whole crew home in mere hours.  The twin imagery is vivid when college-age Tom meets his brother Pat, now an old man in a wheelchair.  The time slippage is even more pointedly illustrated when Tom meets his great-grandniece Vicky, whom he’s spoken with telepathically for all of her life—and is now going to marry.  (The appearance of incest is illusory:  Tom and Vicky have only 1/8 of their parentage in common, or five degrees of consanguinity in terms of Wikipedia’s table.)

Jo Walton has a review with a fascinating (and telling) aside on what Heinlein’s book would have been like if it were written today, rather than in the 1950s.  But we’re going to go on to look at a more unlikely treatment of time dilation.

As far as I know, no one is contemplating making Time for the Stars into a musical.  But years ago I ran across a song on a 1975 album by the rock band Queen.  The song is called “’39.”  The official lyric video gives you both the recording and Brian May’s lyrics.  Note the imagery the band chose for the introductory graphics. 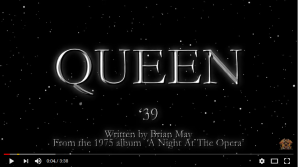 If you didn’t have the lead-in we’ve walked through here, the song might seem rather baffling.  The acoustic sound, the rather antique style, and the mention of sailing off to discover new lands makes us think of olden times.  But what’s with “. . . the day I’ll take your hand / In the land that our grandchildren knew”?

One clue is the songwriter’s coyness about the first two digits of the date that forms the title.  If someone says “’39,” we normally assume they mean 1939.  But there was nothing like this happening in 1939.  The song is full of this careful ambiguity.

If you come to the song with a science-fiction background, however, it’s clear what it’s really about.  Clues are scattered all through the lyrics.  We’ve got the population pressure:  “the days when lands were few.”  The brave crew is “inside” the ship, rather than “aboard.”  It sails “across the milky seas”—the Milky Way.  The singer is “many years away” from his beloved.  The Volunteers bring back news of “a world so newly born” to colonize.  Most significant, he’s “older but a year,” yet the earth and his beloved have radically changed.  We haven’t got twins or telepathy in sight, but otherwise, we might well be talking about the mission of the Lewis and Clark.

When the Web was invented and I finally looked up the song in Wikipedia, I was tickled to find my guess was correct.  According to the Songfacts site, the composer May studied astrophysics, and he himself has referred to the piece as a “sci-fi folk song” (commonly referred to as a “filk song”).

The story line isn’t as clear as Heinlein’s, to be sure.  For one thing, the traveler seems astonished at the relativistic time slippage when he returns (“this cannot be”).  No real astronaut would be that unaware of what to expect.  In addition, in the chorus the singer seems to be addressing both a stay-at-home spouse with whom he’s had grandchildren (“my love”), and a descendant (“your mother’s eyes”)—unless perhaps, like Tom Bartlett, he’s fallen in love with a much younger family member.

In any case, with the necessary compression of a story into the poetry of lyrics, we don’t expect as literal a narrative as in a novel—particularly when, as here, May seems to have been deliberately indirect, even tongue-in-cheek, as a sort of joke on the listener.

But, just as in the novel, the song’s emotional resonance involves a romance as the most poignant expression of the results of time dilation.  It also ends with an appeal for sympathy with the personal dislocation of the narrator, who returns to a world far different from the one he left (“For my life still ahead, pity me”)—a theme also touched on at the end of Time for the Stars.

The three-part comparison reminds us that, even as far back as the 1970s, science fiction turns up in the darnedest places; and that scientific developments can bring new aspects to the timeless concerns of our hearts.

9 thoughts on “Einstein, Heinlein, and Queen”