Now that we’re in the future (as it seemed to us in the 1950s), it’s become conventional to ask plaintively, where’s my flying car?  My rocket pack?  But for my part, now that it’s 2018, I’m asking:  where’s my spindizzy?

The term comes from James Blish’s Cities in Flight, a sprawling science fiction series published between 1950 and 1962.  The first volume, which details how interstellar travel began, was in some versions titled Year 2018!  So the year we’ve just entered is permanently fixed in my head as a memorable future date—just as for many of us, 2015 was memorable as the year to which Marty McFly traveled in Back to the Future II.

Blish imagines a future in which faster-than-light travel is made possible by a device formally titled the Dillon-Wagoner Graviton Polarity Generator, but nicknamed the “spindizzy.”  The more massive the object, the more efficiently a spindizzy field accelerates it.  While you can use the drive in a small spaceship, it really works best for something bigger.  In addition, the spindizzy creates a force field or screen around the spacecraft, which can keep in air as well as keeping out meteoroids and such.  And it has no problem maintaining artificial gravity inside the craft.  The spindizzy is thus perfectly adapted to lifting an entire city off the ground and sending it hurtling through space:  New York, or Scranton, or Budapest.

The idea of walking down Fifth Avenue or stopping by the Empire State Building while voyaging among the stars is irresistibly cool, to my mind at least.  (I used to play at building spindizzy-powered spacecraft out of construction sets as a kid.)  But what makes the story really distinctive is the way Blish depicts the society in which this migration occurs.  Cities don’t leave Earth as part of some glorious exploratory venture.  Rather, they pull up stakes and go elsewhere because Earth has fallen into a permanent depression, and the cities have no choice but to seek economic opportunity among already-existing interstellar colonies, providing established industrial capacity to these still-developing worlds. 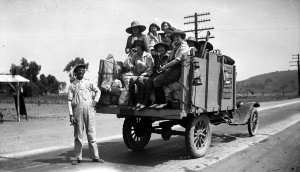 Traveling from planet to planet, offering their services, the flying cities are essentially migrant workers, like the “Okies” in America’s 1930s.  For a city to “go Okie” is an indicator of desperation, rather than of success.  The migrant cities are regarded with suspicion and contempt by the planets they serve, just as the original Okies were.  It’s not your average space opera scenario.

The four volumes, in chronological order, are:

The Cities in Flight stories have a rather complicated publication history.  Initially Blish didn’t intend to write a series at all.  In a 1964 author’s note to the third volume, he describes how John W. Campbell pointed out the full potential of “an idea of Wagnerian proportions” that Blish had been willing to throw away on a 10,000-word novelette.  The expanded project took him fifteen years to “realize properly.”

As the publication dates show, Blish didn’t go at this in a neat sequential way.  First he produced the contents of the main volume, Earthman, Come Home, interspersed with the two overlapping stories that make up the first volume, They Shall Have Stars.  The concluding (and I do mean concluding) book, The Triumph of Time, followed a few years later.  Blish then went back and for some reason wrote a young adult novel in the same universe, A Life for the Stars, telling the “origin story” of a character briefly mentioned in Earthman.

A Mix of Genres

One of the most peculiar things about Cities in Flight is how different the four books are from one another.  Many series make up a single continuous storyline; even in those that don’t, the stories generally are at least the same kind of read.  But Cities gives us four quite different types of tale.

They Shall Have Stars (or Year 2018!) is character-focused.  Paige Russell, a disillusioned spaceman (space travel within the Solar System was taken to be well-developed by 2018, sigh) and Anne Abbott, a suspicious pharmaceutical employee, become involved in developing the life-prolonging drugs or “anti-agathics” that also turn out to be necessary for interstellar flight—because you can go faster than light and still need decades to cross interstellar distances.  Space is big.  Paige and Anne have a thorny love story that’s rather touching.

Meanwhile, Robert Helmuth and Eva Chavez (who have a more perfunctory romance) are part of a team building an apparently pointless “Bridge” by remote control in Jupiter’s atmosphere.  The Bridge’s top-secret purpose is to conduct the final tests for the theory that result in the spindizzy.  Along the way, there’s a good deal of acerbic political commentary (Blish’s 2018 is a close analogue of the McCarthy era) and a lot of soul-searching as the characters search for a purpose greater than their own lives.

A Life for the Stars is a classic Bildungsroman, a coming-of-age story.  Teenaged Chris deFord is accidentally shanghaied on board the city of Scranton when it lifts off.  Through a series of misadventures and adventures, he gains maturity, finding his purpose in life when at the end he’s offered the job of City Manager under John Amalfi, New York’s legendary mayor.  Though there’s a good deal of interesting discussion about sociology and the theory of education, the tone is distinctly lighter than in the other books.  (In my own home library, I filed Life with the “all ages” books suitable for children, and the other three in the “adults only” collection, despite the inelegance of splitting up the series.)

Earthman, Come Home would be a lot like a traditional space opera if it didn’t contain so much brooding and angst.  There’s more high-tech action than in any of the other books.  But the characters (the last two volumes are told from Amalfi’s point of view) are somewhat gloomy.  While Amalfi’s intricate plans and schemes generally allow New York to prevail, the victories are generally ambiguous and not without cost.  This story is also more episodic than the others; the fact that it’s composed of several shorter pieces shows.  Earthman ends with the City of New York relocating permanently in the far-off Greater Magellanic Cloud.  It looks as if this group of Okies may finally cease their wanderings, a contented ending if not exactly a happy one.  Until—

In the Author’s Note to The Triumph of Time, Blish observes that “I had already put my very long-lived characters through nearly every other possible test.”  He now confronts them, not only with certain death, but with the certain death of everything.  The spindizzy-driven planet of “He,” last seen shooting off into intergalactic space at the end of one of New York’s escapades in Earthman, returns with evidence that the entire universe will soon be destroyed—“the imminent coming to an end of time itself” (Triumph, ch. 3, p. 50).  The vast cosmological forces involved cannot be affected by human beings; this is not the sort of space-opera scenario where our doughty heroes somehow manage to avert catastrophe.  The only sort of survival possible is that if the characters can be in the right place in the right time, they can ensure that the new universe that will re-form after the catastrophe will be kind of like our own.  But they’ll never see it themselves.  The main drive of the story is in how the characters cope with the end of the world.

It’s a bit of a downer, right?  But Blish was a gloomy guy.

Cities in Flight is a genuine future history:  a set of varied stories set at different historical periods in the same imagined universe.  There is no overlap between the characters in They Shall Have Stars and those in the other stories, and only limited overlap between A Life for the Stars and the last two.  Since the series gives us a set of snapshots of the Okie cities from their inception to The End, one might say there’s a single long narrative arc.  But essentially, each book has an independent plot.

As we’ve seen, Cities in Flight shows us that these varied stories can be of quite different types—so much so that they won’t necessarily all appeal to a single reader.  On the other hand, the Okie universe is so fascinating, and the characters’ exploits so enjoyable, that I’m willing to read them all, with each different “take” on the future history enriching the others.

Finally, the series reminds us that in depicting the future, it’s usually better, if you can get away with it, to avoid mentioning actual dates.  Fiction of the future inevitably dates itself; after a while real history diverges enough from the imagined history that an old-time SF story becomes a sort of cultural artifact.  But the inconsistency is even harder to hide if you tell us straight-out that starflight was invented in the annus mirabilis 2018.  We can’t avoid being disappointed when the year rolls around and the wonderful thing hasn’t happened yet.

On the other hand, the year is still young.  Maybe some super-secret project will surface before December 31 that allows our cities to start taking flight?  (You wouldn’t have to shanghai me aboard . . .)

11 thoughts on “Cities in Flight”